The battle with Korvaak's minions has unleashed some peculiar beasts upon the Korvan Basin.

Eldritch hounds are of particular interest to the followers of Bysmiel. It seems they live in a pack structure similar to other doglike creatures of Cairn.

The Bysmiel camp wishes to observe what happens to members of a pack when their alpha is eliminated. To aid in this research, travel to the Basalt Crags and kill the eldritch hound called Grimmaw.

The destruction of this abomination shall be rewarded with rare scavenged materials.

Grimmaw, Packhound Alpha has 4 possible spawn points in the Basalt Crags, 2 west of the Vanguard of the Three and 2 to the north. 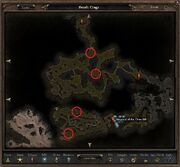