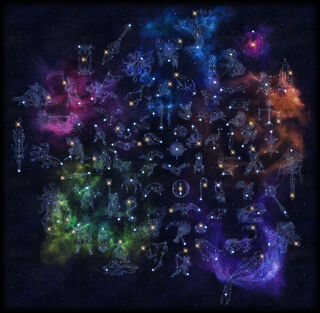 Devotion is a system of skills that serves as an extra layer of character development. The devotion system lets the player earn devotion points by restoring shrines found throughout the game world, and spend the devotion points to unlock various bonuses and abilities from a number of constellations.

Devotion points are unlocked by finding and restoring various shrines scattered throughout the game world.

Restoring a shrine grants a single devotion point. A total of 50 devotion points can be obtained across three difficulty levels (55 with the Ashes of Malmouth expansion). Devotion points are spent within the devotion window, which is accessed through the skill window.

Each constellation is aligned with a combination of affinities:

Some constellations provide special bonuses known as celestial powers. Celestial powers (50 in total, 55 in AoM) are unique skills that can be linked to normal mastery or item skills, and have a chance to trigger off the skill as a secondary effect. Celestial powers also earn experience, increasing the skill level as they are used. They can also be changed at any time within the devotion window, and any experience earned is saved, although powers will not earn experience while they are not assigned to skills.

A skill can only have one celestial power assigned to it at a time, but there is no hard limit on how many different skills have secondary effects. Celestial powers can also be linked to granted skills from equipment and components; should a piece of equipment be switched out, the skill assignment will remain, but the celestial power will no longer be active or gain experience.

You can also freely refund points immediately after assigning them by clicking the Undo button at the top of the screen (so long as you haven't closed the Devotion screen and confirmed your selections).