The faction system in Grim Dawn allows the player to take advantage of the reputation (and infamy) gained with the various groups of Cairn. Completing quests, turning in bounties, and defeating members of opposing factions earns reputation with friendly factions, which gives access to perks such as merchant discounts, special equipment from quartermasters, and new side quests. Killing members of hostile factions earns infamy with these factions, which makes more enemies of that faction spawn, and later grants access to Nemesis enemies.

The base game features 12 factions, of which at the start of a game 7 are friendly and 5 are hostile. The Ashes of Malmouth and Forgotten Gods expansions each add three friendly and one hostile faction, bringing the number of factions to 20.

Some initially friendly factions may become hostile depending on player choice. 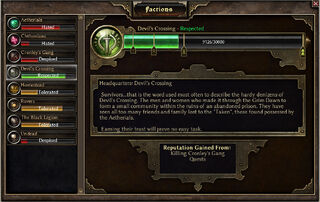 Depending on whether a faction is friendly or hostile, the player can gain either positive or negative reputation with it. In some cases (such as when turning in some quests), gained reputation can be lost, but this cannot make a friendly faction hostile even if the reputation with that faction would go below 0 (it is set to 0 instead). The following actions result in reputation changes:

There are two sets of reputation tiers that form the progressions for friendly and hostile factions. Reaching higher tiers with a faction grants perks that are listed below.

Factions offer bounties via their respective bounty tables. These are small quests where the player can earn additional rewards and reputation. There are a total of 145 bounty missions across the 7 friendly factions.

Each friendly faction offers its own specific equipment for purchase, available from the faction quartermasters as rewards for gaining reputation.

A writ is a consumable item that boosts a character's reputation gain with its respective faction by 50%. Unlike mandates, writs are soulbound, i. e. they cannot be transferred. Even though it's possible to purchase multiple writs from a single faction's quartermaster, only one writ per faction per character can actually be used.

A mandate is a consumable item that boosts a character's reputation gain with its respective faction by 150%. Mandates can be transferred between different characters. Even though it's possible to purchase multiple mandates from a single faction's quartermaster, only one mandate per faction per character can actually be used.

Nemesis bosses have a chance to drop warrants, which boost infamy gained with the respective faction by 50% across all difficulties. Warrants can be freely traded between players.

There are some considerations that apply whenever the game gives the option to become hostile with a previously-friendly faction. Such a choice locks out that faction's quests and bounties, their quartermaster, and makes writs and mandates for that faction unavailable. It also makes that faction available as an enemy, meaning the ability to earn items (including monster infrequents), experience, reputation, and to defeat their nemesis, which also gives access to warrants for that faction. As such, it may be useful to have separate characters to get the benefits of all choices (which is time-consuming), or at least to take different sides on different difficulty levels (which, hovewer, has its own downsides such as reputation resets). There also may be moral or roleplay points made for or against specific choices.

The subsections below describe the specifics of each individual choice in more detail and do not offer the generic advice listed above.

Each faction has their faction vendor items to consider. TODO: describe.

The choice affects the events of the Forgotten Gods expansion slightly. TODO: describe.

With or against the Outcast[edit | edit source]

Siding with Anasteria will make it more difficult to earn reputation with the Black Legion. In addition, Anasteria provides a significant amount of information about the game's lore and backstory if left alive, and provides even more such knowledge in the Ashes of Malmouth expansion.

Siding with the Black Legion soldiers will give access to an additional dungeon and the ability to farm Anasteria for her unique drops.

With or against Barrowholm[edit | edit source]

Choosing the diplomatic solution with Barrowholm gives the ability to fight two bosses: the celestial boss Ravager and the easily-repeated boss Larria.

Choosing to attack Barrowholm gives access to an additional dungeon and the nemesis, Reaper of the Lost.

See: Cult of Bysmiel, Cult of Dreeg, Cult of Solael

Unlike with the other choices, the factions not chosen do not become hostile, so there is no loss of items incurred. However, only the quests for the chosen faction are available, and while the main storyline quests have identical rewards, the Honored-tier side quests provide blueprints unique to both difficulty and faction. As such, it's required to use several characters to get all the rewards.

The Bysmiel cult may be the fastest one to play with: it's possible to get extra Blood of the Watchers for future difficulties, and its quests are less "out of the way" than the other factions. Its Honored-tier quest is also simpler than the other two.

Particular notes on each: