Edit
watch 02:46
The Quarry - The Loop
Do you like this video?
Play Sound
This article is a stub. You can help Grim Dawn Wiki by expanding it. 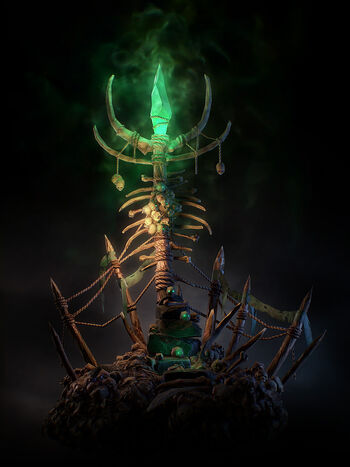 Monster Totems are a feature designed to make the Corrupted Shrine mechanic a repeatable experience.

Similar to Corrupted Shrines, Totems can be activated by the player to spawn a wave of enemies. When all monsters have been defeated, the Totem will collapse and explode with loot, and grant Experience points (2500/10000/15000). Unlike Corrupted Shrines, however, the Totems will not grant Devotion Points.

Totems can spawn in most areas of Grim Dawn, with locations partially randomized - they will typically spawn in one of three possible places within an area.

There are six different types of Monster Totems, corresponding to the type of creature they spawn.

Totems will reward the player with numerous rare items, and have a chance to drop Item blueprints, including those for Rune Augments.

There are also eleven level 94 Legendary items obtainable primarily through totems. These weapons also have a rare chance to drop from any source, but are more likely to appear from Monster Totems. Each item will drop from a particular totem type.

Every totem spawn location is assigned to a group. Per group one totem will spawn per game session. Groups are subdivided when there are several types of totems in a group, which doesn't affect spawning. To figure out which spawn location is associated to which group use tools like grimtools.