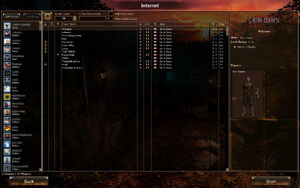 Multiplayer was added to Grim Dawn in build 20 and currently uses Steamworks for hosting and joining games across the Internet.

In Grim Dawn’s multiplayer, players can form a party of up to 4 members. The strength and toughness of monsters scale with the number of players, as does the amount of loot.

In order to host a multiplayer game you need a router that supports either UPnP, or a router that will allow you to manually forward port 27016 for TCP and UDP.

Upon hosting a multiplayer session, the host can elect to enable Player vs. Player (PvP) mode. If this setting is enabled, all players who are not in the same party can actively attack and even kill each other. You cannot loot slain players.

Note that death is still permanent for Hardcore characters that engage in PvP, so only duel if you are ok with losing that character.

Items and Iron Bits can be traded between players in a party. To initiate a trade, right click that player’s status display in the upper left of the screen. The trade window will appear where you can place items you wish to exchange.

When both players confirm the trade, the items offered will leave the player's inventory, and the traded items will be added. Both players must accept the trade before an exchange will take place. If the trade is cancelled, all items and iron bits are returned to player inventories.

Grim Dawn features two loot modes: Free-For-All and Instanced Loot. In free-for-all, all items that drop from monsters and chests are available to be looted by all players. Instanced Loot causes loot to drop for each player separately, as if they were in a solo session. The only exception is loot equipped by monsters, which is randomly assigned to players present when the monster is slain.

You can choose between the two loot modes when hosting the game. Instanced Loot is toggled on by default.

Experience gain is shared in multiplayer, as long as you are in the same party. Iron Bits are shared only if you play in Free-For-All mode. For example, if one player picks up a pile of Iron Bits, all players present will receive an equal share of the currency. In Instanced Loot mode, each player collects their own Iron Bits.

If players are not in a party, such as in a PvP session, then experience and Iron Bits are not shared.

Cross play functions between Steam and Gog as long as all parties are using the same version of the game.