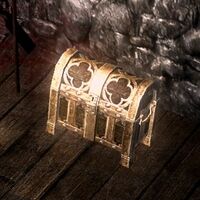 One-shot chests are containers that spawn once per character per difficulty, and contain a guaranteed Epic item, with a chance for a Legendary item on Elite and Ultimate. The chests can be found in various locations throughout the world of Grim Dawn, and once opened will not spawn again in the difficulty where it was already opened.

All one-shot chests (with the exception of boss chests, such as the Warden's stash) are labelled "Exalted Stash". Note that the loot they contain scales to the level of the area, and not the level of the player.