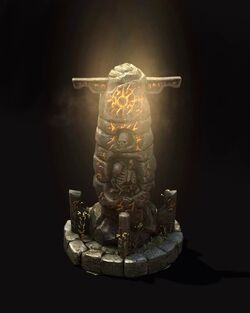 Shrines are a means of earning Devotion points. They can be found scattered throughout the world of Cairn, however following the Grim Dawn they have fallen to ruin or become corrupted by sinister forces and will require restoration or cleansing in order to earn Devotion points.

There are two types of Shrines:

Restoring a shrine grants a single point of Devotion, with a maximum of 50 points in the base game, increased to 55 for the Expansions.

The base game has a total of 59 Shrines across all three difficulties, 28 in Normal, 17 in Elite and 14 in Ultimate.

With the Ashes of Malmouth Expansion, shrines were added for acts 5 and 6, bringing the total to 73 shrines across all difficulties: 33 in Normal, 20 in Elite and 20 in Ultimate.

Forgotten Gods adds a further 12 shrines to the new content, as well as adding 12 new shrines to the previous six acts and making all shrines available on Ultimate difficulty, making it possible to reach 55 devotion points in a single play-through when starting on Ultimate.