Summon a mythical storm raven to support you. Storm ravens are eldritch creatures of uncanny intelligence and magical ability quite different from mundane ravens. Some believe they are not birds at all but rather some manner of ancient sky spirit for which the raven is a preferred manifestation.

Only one raven may be summoned at any one time. The Raven scales with Pet bonuses.

Summon Familiar conjures a raven which hurls orbs of lightning at enemies. The modifiers for the raven unlock further abilities, including a healing skill, a protective aura, and a lightning bolt.

The number of Storm Orb projectiles increases with level:

Ravens, unlike most pets, do not have a basic attack skill equivalent to a player's weapon attack. For this reason, the "Pet Basic Attack Damage" only applies a percentage of flat damage values ​​given by equipment, constellations and skills. 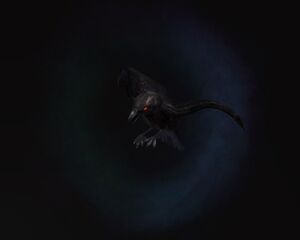