Calls forth a hellhound from the phantom realm to savage the Occultist's enemies. This vicious beast will battle alongside you until its life is extinguished in a blazing inferno.

Only one hellhound can be summoned at any one time. Scales with Pet bonuses.

The Hellhound posesses two basic skills: Claw and Fang Attacks, (it's basic,single target attack), and Blazing Death, where the Hellhound explodes upon death and damages nearby enemies. Blazing Death can be effectively used at any time by re-summoning the pet when it is surrounded by enemies.

Modifiers add a melee AoE attack and a fire-breathing skill for the hellhound, and an aura which can also buff the player.

The Hellhound increases in size with level. 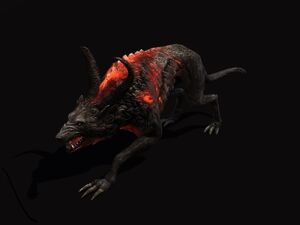