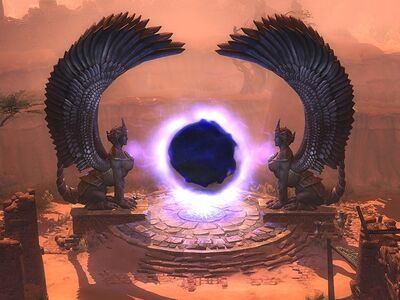 The Shattered Realm is an endless dungeon introduced with the Forgotten Gods Expansion, and can be accessed by speaking to Mazaan, Keeper of Portals in the Conclave of the Three.

The Realm contains 73 custom levels, which load randomly. Levels are grouped into Shards. A Shard consists of three levels, or Chunks, plus a Boss level. Difficulty increases with each successive Shard, until the player chooses to end the session and claim the reward. The further one has progressed in the Shattered Realm, the greater the loot to be collected at the end.

Each Chunk has a progress bar, which is filled by killing enemies and collecting Shattered Souls. When the bar is full, the portal to the next Chunk opens. Completion of each Shard is subject to a countdown timer, and exceeding the timer will lessen the amount of loot collected at the end of the game session.

Common and Champion enemies have a small chance to drop Shattered Soul items, and Heroes and Nemesis foes will drop a Greater Shattered Soul.

Shattered Souls grant additional progress, and also give bonus damage and toughness for a period of 18 seconds. These buffs stack like charges, and each new Shattered Soul refreshes the duration.

Waystones allow the player to enter the Shattered Realm at a particular Shard level. Blueprints can drop from one of the chests in the treasure room after completing a Shard level opened by the particular Waystone. They can then be crafted and given to Mazaan.

At the end of each Shard, the player has the option to either continue or collect a reward. (A reward can also be collected after dying.) The Shattered Realm offers several unique items, including blueprints for Legendary Rune Augments and the level 94 Shattered Guardian item Set.

Shattered Guardian Set pieces can be purchased from Ullana, Shattered Squire, the merchant in the Shattered Realm treasure room, upon reaching the appropriate levels as described in the table below. It should be noted that these set pieces are only available after completing a minimum of two shards.

Note that the timer does not exclude you from these exclusive rewards.

The Shattered Realm features several unique shrines, where rare crafting materials can be offered in exchange for specific buffs that come with a trade-off, similar to Mutators. These effects have a 50 minute duration and are applied to pets at a reduced rate.