Undead are a monster class and one of the enemy Factions within Grim Dawn. Undead creatures encompass Skeletons and Apparitions.

Many tragic tales are told about the undead endlessly roaming the ruins of Arkovia. Some believe them to be spirits trapped within the mortal realm, unable to cross over into their promised afterlife. Others will claim it to be the work of vile necromancy, a legion of undead cursed to serve a cruel master. Perhaps the truth lies somewhere in-between.

One thing everyone can agree upon is that the undead are extremely dangerous to the living. As such, looting their forgotten ruins is considered to be an ill-advised pursuit. 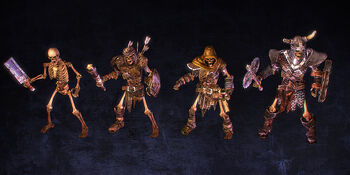